is the second largest country in the world.  With thirteen different Provinces and Territories the physical features, climate, vegetation, animals and natural resources create   an  interesting environment  to produce a distinctively  Canadian Cuisine.  Given our harsh winters and short summers, no other country has had to be as ingenious in things culinary as .
Our recipes are distinctive to each region and the story that goes with them tells a bit of the history of the area from where it comes from.  Canadian Cuisine is recognized worldwide as a unique combination of fresh ingredients and a variety of cultural influences mixed up with tradition.
Indigenous Canadian Cuisine consisted of what was readily available and prepared as imaginatively as possible or as circumstances allowed.  's First Nations people established societies and were sustained by foods that were as various as the regions they inhabited. Today there is an ongoing effort to maintain these traditional foods and way of cooking. Cookbooks record the ingredients and methods of food preparation that were once passed down both through individual instruction and oral tradition. 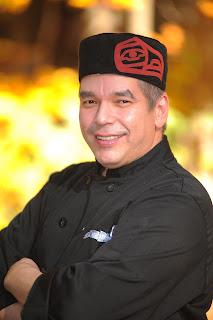 Chef David Wolfman,  the originator of Aboriginal Fusion cuisine said,   "People are often surprised to learn that many of our foods were cultivated by First Nations people and harvested prior to European contact, were exported and have enhanced and fed most of the world. Some of the foods that were exported were potatoes, corn, beans and squash. The variety of Aboriginal foods is as diverse as the regions and tribes across the continent". *Aboriginal times, December 2004.
Chef David Wolfman is an internationally recognized expert in wild game and traditional Aboriginal cuisine.  He is a member of the Xaxli’p First Nation in BC. David Wolfman is a classically trained Chef, Culinary Arts Professor at George Brown College of Applied Arts and Technology in , and Executive Producer and Host of the popular Cooking with the Wolfman™ television program.  David is the recipient of numerous educational and industry awards including seven Gold Awards in Culinary Olympics, an Excellence Award from the National Institute for Staff and Organizational Development, an Outstanding Achievement Award from the Canadian Council for Aboriginal Business, and a 1st Place National Healthy Menu Catering Award from Evian.
Chef Wolfman has kindly provided me with his recipes for Bison Sliders and Jicama Salad. Yum!
Bison Sliders
500  grams Bison Meat ground
2     med eggs
50   grams breadcrumbs
5     ml of each rosemary, thyme and chives, chopped finely
15   ml chili paste
125 grams wild rice, cooked
5     ml dijon mustard
5     ml olive oil
salt and pepper to taste

In a bowl mix the buffalo herbs and wild rice, add the eggs, dijon, chili paste, salt and pepper and mix well.  Form into small patties and chill for 30 minutes.
In a saute pan heat the oil, place the patties, cook until they are brown, turn over and repeat.  Remove from pan and place into the oven and cook until the internal temp is 165*f.
Serve on slider buns and serve with the jicama slaw.  Enjoy
Jicama slaw
1 med jicama, peeled and julienned
2 med apples, peeled and sectioned and rubbed with lemon juice
1 carrot, peeled and julienned
1 celery stalk, finely diced
2 oz rice vinegar
3 oz cup olive oil
1 tbsp honey
1 tsp Dijon mustard
1 tsp chili paste
1/2 tsp kosher salt
1/4 cup soaked raisins (optional)
Method:
In a bowl, mix jicama, apples, celery and carrot.  In a separate bowl prepare a dressing using the oil, vinegar, mustard, honey and the chili paste, and (raisins optional) mix well, add salt and incorporate to salad mixture.  Let marinate for 30 minutes.  Taste and adjust with honey and salt for desired flavor.
Makes 10 – 15 portions
For those interested in learning more   tune in to APTN, the Aboriginal Peoples Television Network http://www.aptn.ca/ to watch "Cooking with the Wolfman." Visit his website: www.cookingwiththewolfman.com
Posted by Gloria Troyer at 07:07

I tried the bison burger--wow! My family went "WILD"--no puns intended!! I was certainly surprised at how well the rice flavors melded with the bison meat and the spicing was delightful!

I recommend that everybody give these bison burgers a shot and I am going to experiment on my family once again and try out the jicama and apple salad--it sounds amazing!